The scales of arbitrary discretion 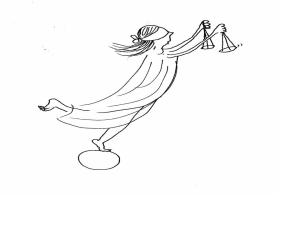 Traditional courthouses like Old Bailey are often topped with a statue of Miz Justice, a pair of scales in one hand and a sword in the other. We’ve always been baffled by the blindfold. How can she see what the scales are showing? And although we know Justice often swings her sword blindly, we hardly expect the judicial establishment to say so.

The Second Circuit courthouse has a gigantic gold statue of Lady Justice in the lobby. We couldn’t find any photos online and would probably end up in Guantanamo Bay if we tried to take one ourselves. So we had to draw her from memory, which at least gives the basic idea.

Instead of using a pair of scales, she’s gripping one balance in each hand. In other words, instead of impartially weighing the evidence (albeit blindfolded), she’s making a purely subjective discretionary determination. Instead of standing upright, she’s in a big hurry, precariously balanced on a beach ball.

What does this say about the justice that comes out of that courthouse? Probably nothing we didn’t already know.

A satirical blog for criminal defense lawyers and their friends who won't give up without a squawk.
View all posts by Appellate Squawk →
This entry was posted in Law, Law & Parody and tagged federal courthouse, judicial discretion, Law & Parody, scales of justice. Bookmark the permalink.