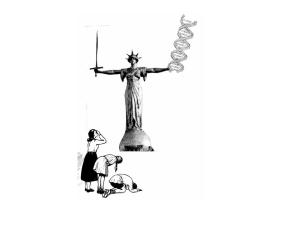 The first recorded murder prosecution was brought by God who, without so much as a Miranda warning, asked Cain where his brother was, knowing full well that Abel had been found dead under suspicious circumstances. Like many of our clients, Cain made things worse by trying to be a smartass, retorting with a smirk, “Am I my brother’s keeper?” This prompted God to conduct the first forensic evidence analysis. “Your brother’s blood cries out to Me from the ground,” He concluded to a reasonable divine certainty, and no one since has ever questoned the results.

Now that prosecutors have taken over the Lord’s work, they expect the same unquestioning acceptance:

DA: Dr. Frankenstein, does the defendant’s DNA match the DNA found at the crime scene?

Defense counsel: Objection, she can’t testify about tests she didn’t do herself.

Court: Doctor, were those tests conducted in the same laboratory where you work?

DA: Doctor, how do you know these tests are accurate?

Dr. F.: We have rigorous protocols requiring everyone to wear a hairnet and to keep their lunch in a separate refrigerator from where the body parts are stored. We have signs posted strictly forbidding the washing of test tubes in the ladies’ room sink.

DA: Doctor, what are the chances of this DNA being someone else’s?

Dr. F.: One in a hundred gazillion gazillion. If you took all the planets in all the solar systems in the galaxy – assuming they’re inhabited, of course – you’d get only half that number.

Defense counsel: Objection, there’s been no foundation for that conclusion.

Court: Overruled. (Chuckling) We assume she knows how to count.

Defense counsel: Doctor, how did you come to the conclusion that this is my client’s DNA?

Dr. F.: As I explained, this here chart clearly shows that this doodad matches that doodad. Only one in a gazillion –

Defense counsel: Yes, but how did you get the numbers on that chart?

DA: Objection, she’s been qualified as an expert. She’s allowed to give an opinion.

Court: I’ll allow it. If she knows.

Dr. F.: Following rigid protocols, we take the sample from the scene of that terrible crime and a sample from your client the perpetrator and put them into this big black cauldron. Then we apply electro-phectro-physio-spectro charges which transform it into colored lights. An experienced trained criminalist translates the lights into numbers, which, as you can see, are the same for the two samples.

A satirical blog for criminal defense lawyers and their friends who won't give up without a squawk.
View all posts by Appellate Squawk →
This entry was posted in Criminal law, Law, Law & Parody and tagged criminal law, DNA, Law & Parody, Medical Examiner. Bookmark the permalink.