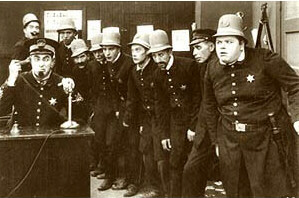 A few years ago, there was a fracas in a Times Square movie theatre when someone told a guy to quit talking during the movie. The gabber ended up being stabbed (non-fatally) by the shusher. We New Yorkers take our movies seriously and don’t take kindly to folks distracting us from the nuances, whether it’s a sensitive little Czech film or Terminator V.

Officer Flatfoot, standing in the theatre lobby, heard two other moviegoers saying it was the gabber who’d pulled the knife and it served him right getting stabbed when the shusher was only trying to get the knife away.

Flatfoot didn’t bother to get the moviegoers’ names. When the defense lawyer heard about them months and months later, of course there was no way of finding them. Their comments supported what the shusher (now the defendant) had said all along.

At trial, the jury wasn’t allowed to hear that Officer Flatfoot had ignored this obvious lead. “I make the rules around here and I say it doesn’t come in,” the judge explained.

The case made its way up to the Court of Appeals (People v. Hayes NY 2011). The defense suggested it would have been no big deal for Officer Flatfoot to get the witnesses’names and that the trial court had been a teeny bit unfair not to let the jury hear about this. Even the Supreme Court recognized in Kyles v. Whitley that it’s “common and accepted” for the defense to argue that the cops blew it. The cops have a total monopoly on the crime scene, after all. If nobody knows whether the witnesses were reliable, it’s hardly the defense’s fault.

The Court reacted like a gourmet chef being asked for ketchup. Require the state to “affirmatively gather evidence for the accused?” That would spell the end of the adversary system!

The People helpfully reasoned that if Flatfoot didn’t take down the names, it could only be because the witnesses had no useful information.

In a decision that looks like it was cut and pasted from the People’s brief, the Court harrumphed that just because defendants have some silly constitutional right to present a defense, that doesn’t mean “carte blanche to circumvent the rules of evidence” by demanding “automatic admission of any hearsay statement.” That would lead to “speculation, confusion and prejudice,” otherwise known as reasonable doubt. Clearly the defendant was demanding an “unfettered right” to challenge the cops “by any means available.”

Donning his Malcolm X t-shirt, Chief Judge Flipman dissented. Maybe the Due Process Clause can’t make the cops do their jobs, he said, but if they screw up so as to “impair the adequacy of the proof of guilt,” the defendant has a right to tell the jury.

A satirical blog for criminal defense lawyers and their friends who won't give up without a squawk.
View all posts by Appellate Squawk →
This entry was posted in Criminal law, Law, Law & Parody and tagged Court of Appeals, Keystone cops, Kyles v. Whitley. Bookmark the permalink.