Posted on November 2, 2011 by Appellate Squawk 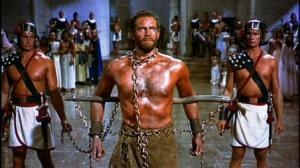 Appellate Squawk’s idea of a good time is to pile into the Supervising Squawk’s cramped office with half a dozen other squawks to watch live streaming arguments in the Court of Appeals on his computer. We kibbitz the good guys (“Come on, cite People v. Rodriguez!”) and make rude remarks to the other side and, naturally, to the umpires.

Although we almost never get to argue to that august court in person, we feel like we know the judges the way you know the characters in a sitcom. There’s Judge Graphpaper (“What RULE are you proposing we adopt, counselor? We need a RULE!”); Judge Smiley Spigot (“Well, that’s not how we do things in Buffalo!”); the WASPy Judge Smith (“He says the gun in his apartment wasn’t his? Don’t you just hate it when people leave their guns in your apartment?); the taciturn Judge Jones with his deep Paul Robeson voice; and Chief Judge Flipman of the sorrowful countenance (“The i.d. was four years after the crime? Isn’t that an awfully long time, counselor?”)

At the last arguments we watched, People v. Clyde AD4 and People v. Cruz AD2, the theme was the shackling of defendants at trial, a practice generally frowned upon. As Blackstone or somebody said, a defendant “ought not to be brought to the Bar in a contumelious Manner; as with his Hands tied together, or any other Mark of Ignominy and Reproach. . . unless there be some Danger of Rescue or Escape.” And besides, shackles hurt. “Look you, keeper, you should take off the prisoners’ irons when they are at the bar, for they should stand at their ease when they are tried.” Deck v. Missouri (2005)(citing some old case).

We’ve never understood why this prohibition is only for jury trials. In the Bronx Hellhole of Justice our incarcerated SORA clients had to stand with their hands cuffed behind their backs for the whole hearing just because the guards didn’t feel like taking off the cuffs. Actually, most of the incarcerated defendants we saw in that courthouse were brought to the Bar in a distinctly contumelious manner.

A couple of years ago, the Court of Appeals found it “unacceptable” to make a defendant wear a stun belt at trial just because he was charged with a serious crime. People v. Buchanan (2009). The dissent pooh-poohed the defendant’s protests about the discomfort of the stun belt, explaining that he was over 6 feet tall and weighed over 300 pounds. Whether this means he was dangerous as a matter of law or that the Constitution has weight limits is unclear.

The tone of the arguments in Clyde and Cruz was, yeah, yeah, presumption of innocence, but Security is all. Despite some contrary rumbling from Judge Jones’s corner. But nobody considered that defendants in a courtroom are surrounded by half a dozen beefy guards presumably trained in the Bruce Lee arts. And it’s the guards – not the judges – who are dictating handcuffs and shackles.

The question as we see it is, who runs the courtroom? Is it the judge, sworn to uphold the Constitution and ensure that you can tell the difference between a courthouse and a jailhouse? Or the guards that no one is guarding?

We breathlessly await the outcome.

A satirical blog for criminal defense lawyers and their friends who won't give up without a squawk.
View all posts by Appellate Squawk →
This entry was posted in Criminal law, Law, Law & Parody, SORA and tagged Blackstone, Deck v. Missouri, Judge Theodore Jones, NY Court of Appeals, shackling. Bookmark the permalink.