Posted on December 14, 2011 by Appellate Squawk

Family farmers have a long proud tradition of being oppressed, from the feudal system to sharecropping to the constant threat of engulfment by Agribusiness. A couple of Sundays ago, Squawk, who’s as urban as the Chrysler Building, joined farmers from all over the country to march to Zuccotti Park under the banner of Occupy Food.

We rallied at La Plaza Cultural, a community garden on the Lower East Side where speakers urged an alliance between “urban eaters and rural eaters,” tactfully suggesting that the former might give some thought to where their food comes from. We heard about the organic farmers’ battle against the Monsanto Corporation juggernaut as well as the never-ending struggle to keep family farms going in the face of constant land grabs by “the rich and ridiculous.”  We heard about the plethora of urban organizations such as Farm School NYC, Food Democracy Now, Food Justice, and Just Label It, dedicated to keeping open the connection between food and growing things.

Being accustomed to seeing Occupy marches flanked by solid rows of heavy-duty jackbooted motorcycle cops, we were amazed that we were accompanied only by a handful of motorscooters who stopped the traffic at intersections to let us cross.  We marched down the Lower East Side, across Houston Street and down Broadway past the courts. It was the late-Sunday-brunch hour, and people looked up from their mimosas and GMO-filled omlettes to wave encouragingly.

It was dark by the time we got to Zuccotti Park which, since last month’s police invasion, has become a moonscape barricaded by a double row of police fences.  On most nights the cops far outnumber the handful of diehards saying “mic check.”  If you want to go in, the cops search your bag just in case you might be trying to smuggle in a tent and start a new encampment.  Seeing us coming, the resident protesters jumped up and shouted, “Welcome home!”

We had our brownie box camera with us and hope these snapshots, if a little blurry (it’s not easy to march and take pictures!) will convey some of the energy and good spirits of that day. 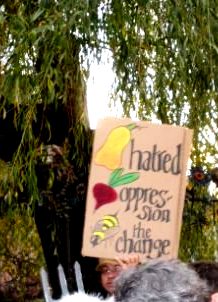 Prune the top 1% and feed the roots. 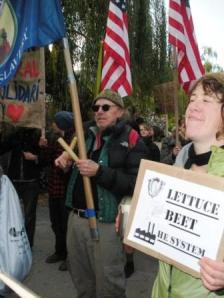 Know what you eat. 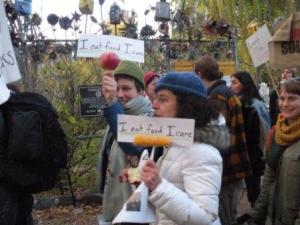 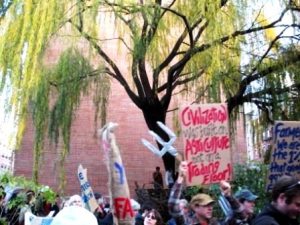 Civilization was built on agriculture, not the trading floor. 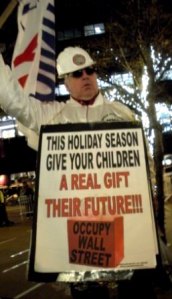 Arriving in Zuccotti Park: Give your children a real gift

Going home on the subway.