Viewing the evidence in the light most favorable to the People

Posted on February 18, 2012 by Appellate Squawk 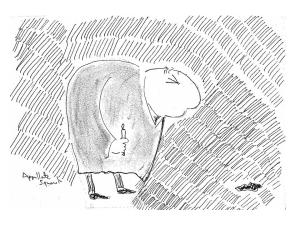 We recently learned a new expression from a psych expert: “Doesn’t operationalize.” It’s a tactful alternative to calling something a complete fraud, as in, “A rabbit’s foot keychain doesn’t operationalize its claim to ensure optimal quality of life when there’s no known error rate and no peer-reviewed studies showing a causal connection.”

We sometimes think the Court of Appeals doesn’t operationalize.

We would. Chief or no chief, making suggestions to other branches of government plus $3.98 will buy you a cup of coffee.  The only way for courts to protect the rights of the accused is by upholding them in actual cases and overturning convictions when they haven’t been upheld.

On that same Valentine’s Day, the Court of Appeals signed off on 6 pages of bromides about the right of the accused to a fair trial.  People v.  Kevin Smith (2012). Apparently they hoped no one would read to the end and notice that what little is left of the defendant’s right to testify has been catapulted out the window in the name of “the trial judge’s sound discretion” and “harmless error.”

Smith involves a trial court’s ruling under People v. Sandoval (1974), a disco-era case where the Court of Appeals did the Hustle and held that if a defendant testifies, the People can bring up his past convictions. Not to show his criminal propensity, perish the thought. Just to let the jury know that if the scumbag takes the stand they can’t believe a word he says.

Naturally this puts a dent in the defendant’s right to testify. Who doesn’t have a conviction or two in their past? To help the defendant make up his mind the trial court holds a Sandoval hearing to decide how many convictions and how much detail the People can go into if he testifies.  The balance between the right of the accused to be convicted only on proof beyond a reasonable doubt that he committed the crime he’s on trial for – versus the People’s right to get a conviction of anyone they indict – is left to the “sound discretion” of the trial court. Operationalizing sound discretion means the judge can do whatever she wants and you might as well bark at the moon as try to appeal.

The last time we appealed a Sandoval ruling it was, by a fantastic coincidence, the same type of drug case in front of the same notorious judge as in Smith . The hearing, which was probably identical to the one in Smith, went like this:

Court: Yes, that’s all admissible. Except for the marijuana arrest. Unless of course he opens the door by claiming that he’s not guilty of the charged crime.

Defense counsel: But that’s unfairly prejudicial! Sandoval says the People can’t use prior convictions for the same offense to show propensity to commit the charged offense.

People: It’s the People’s position that we have a right to show he’s a criminal. Otherwise he gets a windfall.

People: Obviously he’s not innocent or we wouldn’t be prosecuting him. It’s not fair, criminals are hogging all the rights and the People don’t get any! Besides, we’re only using his past convictions for credibility.

Court: If he sold drugs before, he obviously did it again in this case. And he’s probably done it a lot of other times that he never got caught for, so where’s the unfairness? Anyway, it’s my courtroom and I make the rules, so there.

Six sevenths of the Court of Appeals thinks this isn’t abuse of discretion, while the other seventh thinks it’s harmless abuse. Because nothing the defendant could have said would have changed the verdict.  How could anyone know that? Some operationalizing!

And it was none other than District Attorney Vandal, dropping in between gigs, who argued the case. Some people will do anything to get on camera. Reviewed in the next post.

A satirical blog for criminal defense lawyers and their friends who won't give up without a squawk.
View all posts by Appellate Squawk →
This entry was posted in Criminal law, Law & Parody and tagged NY Court of Appeals, Sandoval, Valentine's Day. Bookmark the permalink.