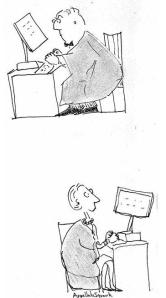 A little-noticed feature of the estimable NY Law Journal is the advice column for judges entitled “Judicial Ethics” nestled in the back pages between “Recent Developments in Scaffolding Law” and “Limited Liability Entities.” If you liked “Dear Abby” you’ll find this column irresistible. Here’s a sample:

1) A judge who provided funeral services to an attorney asks if he or she should disqualify him or herself whenever the attorney appears in court [this was a real question].

Answer:  A judge may engage in outside employment provided that it does not create the appearance of impropriety or interfere with his or her judicial functions. The fact that the attorney continues to appear in court after his funeral suggests that he was not fully dead at the time, which might be perceived as reflecting on the judge’s competence as an undertaker. On the other hand, if the attorney was fully dead, his subsequent appearances in court might indicate an impairment in the judge’s functioning. Next time the attorney appears in court, the judge should disclose to the parties that he did, in fact, bury the attorney to the best of his or her ability and assure them that this will not affect his or her ability to bury more attorneys in the future.

2) A judge reports that he or she feels “cranky and irascible” at certain recurring times of the month and asks whether it is appropriate to recuse him or herself on those days.

Answer: A judge who acts erratically and inconsistently undermines public confidence in the judiciary.  It is obviously inappropriate for a judge to be cranky and irascible on certain days. The inquiring judge should strive to emulate his or her colleagues who manage to be cranky and irascible every day. (Except when there are visiting school groups).

3) A judge of the Appellate Division writes that it is customary to honor retiring colleagues with a ceremony during their last court session. The attorneys who appear for oral argument are pleasantly surprised to find themselves directed to participate in an hour and a half of accolades and ovations accorded to the departing judge, for whom they naturally entertain warm and fuzzy feelings. A law firm that regularly appears in the Appellate Division has offered to provide a cake with a girl jumping out of it for the next retirement ceremony. The judge asks if this would be appropriate.

Answer: So long as the girl is not related to any of the judges within the fourth degree of relationship, there is nothing inappropriate about her participation in a retirement ceremony, assuming of course that she is a member of the bar in good standing.

4) A judge whose spouse recently eloped with a personal injury attorney who regularly appears before the judge asks whether he or she may use the proceedings as an opportunity to get even with the attorney for this lowdown blow to the judge’s self-esteem. The judge further inquires whether it is appropriate to address the attorney before the jury as “you cretinous douchebag.”

Answer: A judge should not make remarks that could be misunderstood as displaying personal animus. Because “cretinous douchebag” is gender-specific, it could easily give the impression of bias and should be avoided. The judge should disclose to the parties that he or she will ensure that the attorney loses every case he brings in the judge’s court and ask what are they going to do about it.

5) A judge who owns a company that manufactures judges’ robes asks whether he or she may distribute his company’s catalogues in his or her colleagues’ mailboxes. The robes come in a wide variety of styles and colors designed to be flattering to the judicial figure. They are machine washable and made of breathable fabric that hides food stains, bloodstains and other forensic matter. Epaulets, stripes or sequins can be added for an extra $3.98.

Answer: So long as the judge feels that having a judicial robe business does not exploit his or her judicial position, there is nothing inappropriate about providing high quality products to his or her colleagues.  Do they come in extra large?

A satirical blog for criminal defense lawyers and their friends who won't give up without a squawk.
View all posts by Appellate Squawk →
This entry was posted in Law & Parody and tagged Appellate Division, Judicial ethics committee, NY Law Journal. Bookmark the permalink.