Praise the Lord and renew my drivers license

We think prayer, like sex, should never be compulsory and a town board meeting is no place for non-consensual piety. But the Supremes recently held that the Town Board of Greece, NY  (pop. 94,000) isn’t violating the First Amendment by having local holypersons call on Jesus at the start of their monthly meetings.  Greece v. Galloway (2014).

Justice Kennedy figures that government prayer is a good thing “to accommodate the spiritual needs of lawmakers” while they shoulder such responsibilities as granting zoning variances, issuing business licenses, deciding where to put stop signs,  inducting high school athletes into the local Hall of Fame and proclaiming Spay-Neuter Awareness Week.  Prayer “sets the mind to a higher purpose,”  explains Kennedy, apparently never having attended compulsory school chapel where prayer mostly sets the mind to spitballs and tacks on the seat.

The Court indignantly rejected the idea of non-sectarian prayer, reasoning that the Government “may not mandate a civic religion that stifles any but the most generic reference to the sacred any more than it may prescribe a religious orthodoxy.” Anybody who finds Christian prayer “distasteful” may “exit the room” and “their absence will not stand out as disrespectful or even noteworthy.” Justice Thomas  sniffed that in any event, “Adults often encounter speech they find disagreeable.”

The dissent, comprised of the three New York girls and Breyer, asks: What if you went to the DMV and the clerk made you bow your head and pray with her before you could renew your drivers license? What if you had to wait outside the voting booth until the clerks accommodated their spiritual needs and set their minds to a higher purpose? How is that any different from being forced to pray at the Town Board meeting if you want to put in a new septic tank?

But they’re only the dissent.  Here’s what government offices will look like from now on:

Deacon Hallelujah:   Welcome, sinners, to the Department of Motor Vehicles where ye may obtain thy drivers license, renew thy old one or pay thy tribute to Caesar.  The congregation will now rise and join me in prayer.  O Lord Jesus, the only-begotten Son of God, who didst ride into Jerusalem on a donkey,  grant that we too may always drive safely and within the speed limits –

Deacon Hallelujah: If thou findest prayer distasteful, brother, thou mayest exit the room. Verily, we will not consider it disrespectful or even noteworthy. You’ll just lose your place in line.

Applicant #2: What if I made my customers get on a carpet and bow to the East before they could buy a newspaper?

Deacon Hallelujah: The DMV accommodates other religions on a rotating basis. On alternate Tuesdays we have an Imam who requires everybody to do exactly that.

Applicant #3:  Why do we have to pray at all? Why isn’t it enough just to show we can drive a car?

Deacon Hallelujah:  The Supreme Court says prayer lends you gravity and reminds you to transcend petty differences in pursuit of a higher purpose.  Just like it does in the Middle East.

Applicant #4:  So why not just say, “Let’s transcend our petty differences and pursue our higher purpose in getting our licenses renewed”?

Deacon Hallelujah: How dare thee mandate a civic religion that stifles any but the most generic reference to the sacred! That’s exactly the same thing as requiring everyone to join a particular church.

The Town Board did make a stab at ecumenism when, after constitutional objections started rearing their ugly heads, it allowed a Wiccan priestess to lead the prayers.  She was probably burned at the stake afterwards.

Speaking of ugly heads,  the Satanic Temple has proposed a statute of the goat-headed Bahomet to provide ecumenical balance to the monument of the Ten Commandments in front of the Oklahoma legislature.   The clay model shows Bahomet  making the Boy Scout pledge with his right hand and a sort of Buddhist mudra with the left while two children gaze up at him like Santa Claus – a true non-sectarian deity. 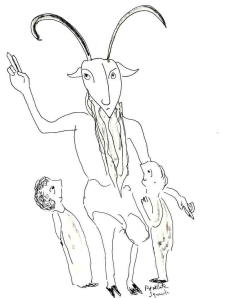 Lest you think the Satanic Temple is only active in Oklahoma, check out their proposal to participate in the NY Adopt-a-Highway program.  It shows a slithering snake who doesn’t look like he’s from around here and some aerial shots of highways accompanied by a suitably Mephistophelean voiceover. But we New Yorkers have our own spiritual monument, conveniently inflatable and portable. 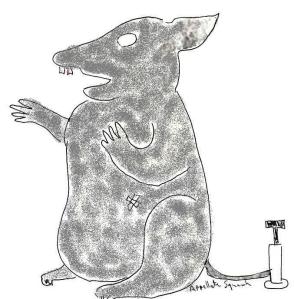 He’s as non-sectarian as they come.

A satirical blog for criminal defense lawyers and their friends who won't give up without a squawk.
View all posts by Appellate Squawk →
This entry was posted in Humor, Law, Law & Parody, Satirical cartoons and tagged Bahomet, giant inflated rat, Greece v. Galloway, Justice Kennedy, Satanic Temple, US Supreme Court. Bookmark the permalink.

3 Responses to Praise the Lord and renew my drivers license