Can you be fired for calling your boss a f*cking moron? 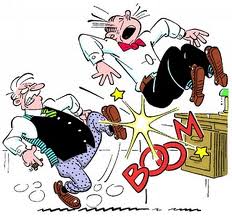 Can you be fired for calling your boss an insufferable blowfish? An uninformed cactus?  A fucking moron? Not necessarily, says the National Labor Relations Board. It depends.

We’ve recently been reconnoitering the unfamiliar territory of labor law in quest of the meaning of  free speech in the workplace.  We were astonished to discover a whole area of law that takes a realistic and not unsympathetic view of the temptation to lose your cool in the face of overbearing authority.  It was a refreshing getaway from our usual habitat where you can be thrown in jail for calling the judge a pompous barnacle and truth is no defense.

In fact, the NLRB has developed a whole jurisprudence of cussing the boss. We thought we’d share a few highlights. These are all real.

The boss announces that if employees don’t agree to the proposed contract, they’ll lose their retroactive pay.  Can they be fired for wearing buttons saying “STICK YOUR RETRO”? No, said the Board, because the buttons constitute “protected concerted activity” under the Labor Relations Act, meaning expressing shared concerns about the terms and conditions of the job. Southern California Edison Co.

Nor was the message so “obscene” as to forfeit that protection, unlike the sweatshirts worn by phone company employees during contract negotiations saying “MA BELL IS A CHEAP MOTHER,” which the Board declined to find amusing.  Southern Bell Telephone Co.  In contrast, the buttons conveyed a “non-obscene” message akin to “stick it in your ear.” It would have been different if they had said “STICK IT IN YOUR RETRO.”

Recognizing that disputes over working conditions often “engender ill feelings and strong responses,” and that the shop isn’t “polite society,” courts have given “some leeway for impulsive behavior.” Thor Power Tool Co.   This view comes from Supreme Court Justice Frankfurter who called such outbursts “a moment of animal exuberance.” Milk Wagon Drivers Union of Chicago (1941).  “Consarn it!” he would say to Justice Brandeis after a long day of oral argument. “There’s only so much a man can take of all this blankety-blank judicial restraint.” Unreported.

Labor law recognizes that an employee’s “opprobrious statements” may well have been provoked by the boss. In Plaza Auto Center, Inc., a manager repeatedly and maddeningly rebuffed a salesman’s questioning of the company’s commission policy, saying that if he didn’t like it he could go somewhere else. When the salesman finally called him “a fucking crook,” the Board found this to be protected concerted activity.

Labor law also recognizes that swearing is normal speech in some shops. A catering worker, reacting to being humiliated by the boss in front of the guests, Facebooked:  “Bob is such a NASTY MOTHER FUCKER don’t know how to talk to people!!!!!! Fuck his mother and his entire fucking family!!!! What a LOSER!!!! Vote YES for the UNION!!!!!!!” Pier Sixty, LLC.

The NLRB held this to be protected concerted activity because it was impulsive, “echoed longstanding complaints about management’s disrespectful treatment of employees,” and “sought redress through upcoming union elections.”  Taken in context, the slur on the boss’s family was simply an emphatic criticism of the man himself. The decision showed that “motherfucker” was practically a routine form of address in the kitchen, quoting an unappetizing exchange between the manager and the chef that would make anyone decide to go eat somewhere else.

The dissent nevertheless argued that the Facebook post was nothing but an “outrageous, individual griping episode,” and obviously not impulsive where the employee had “put in the time, thought, and coordination necessary to use capitalization and punctuation.” Yessiree, it takes a lot of time, thought and coordination to hold down that exclamation mark key!!!!!!!!!!!!!!!!!

In Datwyler Rubber and Plastics, Inc., employees protested the imposing of a 7-day workweek. Employee Moore told the manager, “God created the world in six days and rested on the seventh day,” and that the employees should also be permitted to rest on the seventh day. The manager answered that God had nothing to do with it.  Another employee protested, “God has everything to do with it, because if it weren’t for God, none of us would be here.”

Unable to answer this, the manager retorted that if Moore didn’t like it, she could turn in her badge and go flip burgers. Moore called the manager “a devil” and warned that Jesus Christ would punish him and Datwyler Rubber for the 7-day schedule.

The NLRB found that although this “outburst” could “reasonably be viewed as offensive,” it was clearly part of a discussion about working conditions and “unaccompanied by physical contact or threat of physical harm.” This seems to us exactly backwards.  When Moses told Pharaoh that God would inflict a plague of locusts if he didn’t free the Hebrew slaves, it was hardly “offensive,” but definitely a threat of physical harm. We would steer clear of Datwyler Rubber during a thunderstorm.

As for vituperating one’s colleagues, the same standards apply.  Calling a fellow employee “a brown-nosing suck-ass” when arguing over whether to unionize was found to be protected concerted activity. Traverse City Osteopathic Hospital.  On the other hand, a Facebook posting by a respiratory therapist that a co-worker’s habit of sucking his teeth was driving her so nuts that she wanted to smack him with a ventilator failed to qualify. Although this was arguably a complaint about working conditions, the therapist “was not even suggesting that the Employer should do anything about it.”

As our fellow-blogger Simple Justice would say, none of this is legal advice.  The main reason for not calling your boss a self-deluded toadstool is that it’s unlikely to inspire change. But if your animal exuberance is just too much – –  be sure you’re also engaging in protected concerted activity!!!!!!!!!!!!!!

A satirical blog for criminal defense lawyers and their friends who won't give up without a squawk.
View all posts by Appellate Squawk →
This entry was posted in Humor, Law, Law & Parody and tagged Free speech in the workplace, Justice Frankfurter, Labor Law, NLRB. Bookmark the permalink.

1 Response to Can you be fired for calling your boss a f*cking moron?