Posted on November 8, 2016 by Appellate Squawk 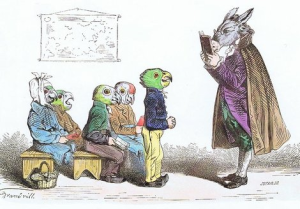 Once again, as part of the new “compassionate, client-centered”  ideology, the Great Dictator decreed that we attend another compulsory thought-reform program. This time it was about sex.

We learned that according to correct thinking, it’s only mindless conformists who allow themselves to be identified by their birth-assigned gender. Why, the doctor who filled out your birth certificate didn’t even know you. You must struggle for your identity on the battlefield of pronouns.

Unlike at the last boss-mandated training, we weren’t forced to stand up and say what our pronoun was. A good thing, now that we realize it’s a device for exposing us as mindless conformists. Instead we were instructed that it’s de rigueur in the brave new world to ask this question to our clients.

This made us think of our very first case, a client who’d pled guilty to gruesomely torturing and killing three people, but had a marvelous appellate issue.  Since winning an appeal from a guilty plea can ultimately result in just getting a longer sentence, we journeyed up the river to see if he wanted to take the risk.

But as soon as we sat down with the door locked behind us, he launched into his story of the murders.  “Those guys were going around the ‘hood saying I was a faggot,” he explained. “Obviously I couldn’t put up with that. So I had to kill them.”

“Of course,” we said compassionately. “Now, about your right-to-counsel issue. . . ”

We truly don’t understand the mentality of force-feeding The Truth.  As the wizard Merlin told the future King Arthur, the only principled way to disseminate your ideas for saving the world is “to make them available and not to impose them on other people”  (emphasis in original).

But thanks to our mandatory enlightenment, we now know why Subway Big Brother tells us to stand up for “a pregnant person.” And all this time we thought it meant don’t bother standing up for pregnant frogs.

A satirical blog for criminal defense lawyers and their friends who won't give up without a squawk.
View all posts by Appellate Squawk →
This entry was posted in Civil Liberties, Humor, Law & Parody, Satirical cartoons and tagged political correctness. Bookmark the permalink.

2 Responses to Squawk is sent to PC training — again.