Is your brief turgid and prolix?

Posted on November 23, 2016 by Appellate Squawk 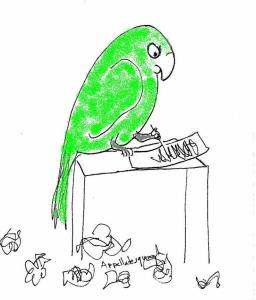 Judges are always complaining that appellate briefs are too long or, as Judge Saxe wrote in the NY Law Journal, “turgid and prolix.”

As the Emperor told Mozart: “Too many notes.”

Now they’ve resolved to take up arms against this sea of words. The NY Court of Appeals, after muddling through since 1897 without word limits, has decreed a maximum of 14k.  The federal courts are slashing it to 13k.  No more fat briefs! They must be put on a strict word-counting regimen.

So we were astonished when our local appellate court rejected our brief for incorporating into the text three photos that were shown to the jury at trial. If a picture is worth a thousand words, we saved. . . we saved. . . well, you do the math.

The prohibition against illustrated text dates back to the days of Blackstone when trials went like this:

The Crown: Constable, doth this illuminated manuscript justly and verily portray the loaf of bread appropriated by the accused to which she had neither right nor title?

Lord Feathergood: Away with such Popish devices, Sir! Forsooth, the Court giveth not a fig for whether the stolen property be white or rye. Say plainly, is the prisoner to be hanged or not?

But in our modern enlightened era, no prosecutor would dream of conducting a trial without visual aids like this:

“Officer, does this photograph fairly and accurately show where the defendant was selling drugs? How far was he from the 99-cent store over here? Please indicate where inside the laundromat the buyers were located.  Can you point to where you were standing when you had a clear and unobstructed view from around the corner?”

Or in civil trials:

“Doctor, can you say to a reasonable degree of medical certainty that this thingummy on the X-ray is the anterior view of the pancreas and not a pair of scissors that the defendant left inside the decedent after the operation?”

“Professor, is it your expert opinion that those tracks at the scene of the collision are not skidmarks, but the footprints of a giant biped unknown to science?”

“Send the photographs under separate cover,” sniffs the court clerk. Get real. Even assuming with many arguendos that these desperately overworked underpaid judges read the briefs at all, they’re not likely to stop and hunt around for the exhibits.

“We see nothing unduly suggestive about the lineup merely because the defendant was a 17-year old high school student and the fillers from the homeless shelter were in their 40’s.   Age difference alone is insufficient to render the procedure unconstitutional. A lineup is not a Hollywood casting agency where the police are required to provide fillers identical to the suspect.”

You know they haven’t looked at the lineup photo.

How much easier for everyone if the photos were scanned into the text! To paraphrase that great jurist Alice in Wonderland, “What’s the use of a brief without pictures?”

A satirical blog for criminal defense lawyers and their friends who won't give up without a squawk.
View all posts by Appellate Squawk →
This entry was posted in Criminal Defense Appeals, Humor, Law & Parody, Satirical cartoons and tagged appellate briefs. Bookmark the permalink.

2 Responses to Is your brief turgid and prolix?