Since prosecutors’ summations are basically commercials to sell the jury on a guilty verdict, it was only a matter of time before they started using advertising graphics.

In People v. Santiago (2014), New York’s top court saw nothing wrong with the People’s showing a series of photoshopped slides supposedly showing a baby’s soul fading into oblivion. To prove that she was smothered on purpose and not by accident.

Naturally, it proved no such thing, but there wasn’t a dry eye in the courtroom and you can guess what the verdict was.

Recently the Court has again given the green light to creative prosecution, this time approving the People’s touching up the defendant’s arrest photo with arrows pointing to his face. Each arrow demonstrating their “theory of the case,” i.e., that the defendant was “the face of death.” People v. Anderson (2017).  It must have looked something like this: 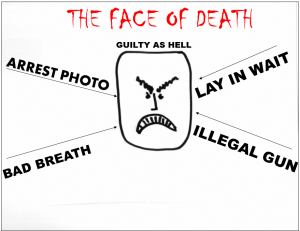 It was also fine for the People to add comments to the autopsy diagram, so long as they were “fair inferences.”

The Court reasoned that if it’s okay to say it, it’s okay to show it. The dissent, who apparently reads something besides law reports, argued that it’s been known for quite awhile that people tend to uncritically believe what they see. Whereas we recognize words as just something coming from speakers, we respond to images as “reality.” Therefore, visual “information” can be persuasive for the wrong reasons.

This isn’t a new discovery. Back in 1904, Wigmore on Evidence observed that visual aids in the courtroom can positively substitute for proof. Does Doe accuse Roe of stealing his horse? Have a horse brought into the courtroom and triumphantly say, “If you doubt me, there is the very horse!” The jury will consider this as definitive corroboration.

Believing what we see is explained by evolutionary biology.  When confronted by a saber-toothed tiger, the humans who said, “Aw, that’s probably just photoshopped,” tended to have fewer descendants than the ones who ran. But critical thinking wins out in the end. . . doesn’t it?

A satirical blog for criminal defense lawyers and their friends who won't give up without a squawk.
View all posts by Appellate Squawk →
This entry was posted in Criminal law, Law & Parody, Satirical cartoons and tagged Wigmore on Evidence. Bookmark the permalink.