Posted on November 22, 2017 by Appellate Squawk 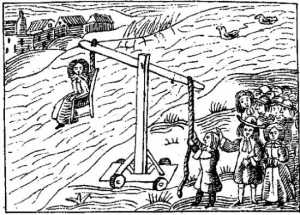 The trial court did not abuse its discretion in admitting expert testimony concerning defendant’s failure to pass the water-dunking test. Dr. Brimstone, who has testified in over 200 witch trials, was plainly qualified to explain to the jury that immersing a suspect in water has long been accepted by the forensic dunking community as a reliable technique for determining guilt.  Defendant failed to proffer scientific research supporting his criticisms of dunking methodology, which in any event, go to weight, not admissibility. It is well-established that admissibility is firmly within the sound discretion of the judge who can admit whatever the hell he wants so long as it’s been admitted before.  We find no error where, as here, the testimony was clearly relevant to a matter at issue and helpful to the jury in reaching a guilty verdict.  — United States v. Serious Science (2017).

We stole this idea from Judge Nancy Gertner (Ret.), famous for her caustic wit when it comes to pseudo-science in the courtroom. The occasion was the Innocence Project’s 25th Birthday bash, celebrating a quarter of a century of exonerations, but also puzzling over why they’ve made hardly a dent in everyday judge-think.

Another refreshingly forthright voice at the party was Chief Judge Harry Edwards of the DC Circuit, who oversaw the National Academy of Sciences Report in 2009.  The NAS Report, if you remember, rocked the criminal justice system by exposing forensic “science” as nothing but the opinions of cops in labcoats. “Just being based on science doesn’t make it scientific,” said Judge Edwards. “That’s like saying a movie is based on a true story.”  “Experts” testifying to “100% certainty” that a bullet, footprint, hair or bitemark “matches” the defendant’s gun, shoe, head or teeth is just humbug.  No matter how carefully you peer through a microscope, it’s meaningless to say that two objects are similar if you don’t have a database and statistics to know what similarity means.

In other words, it’s like declaring a match between two faces because they both have two eyes and a nose.

Gertner and Edwards agonized over why neither the NAS Report nor the even more devastating 2016  PCAST report has had so little effect in the courtroom. “It drives me completely out of my mind that judges are still admitting bitemark testimony,” said Edwards. “It doesn’t matter whether the lab follows standardized procedures if the whole field has never been shown to be valid or reliable.”

Noting how the present administration has put forensic science reform under the control of the Department of Justice, Edwards called the situation “a nightmare.”  Reform can’t be left in the hands of prosecutors, “who created the problem in the first place,” he said.  There has to be an independent agency of “real scientists” to create “a culture strongly rooted in science.” But the DOJ snuffed out the burgeoning National Commission on Forensic Science and replaced it with an in-house “working group” headed by a career prosecutor who thinks “the jury is still out on bitemarks.”

“And that’s why we’re not going anywhere,” said Edwards.

Both judges agreed that criminal defense attorneys need to take more initiative in challenging pseudo-science. Gertner recalled her frustration at hearing an arson expert testify like this:

Expert: I had Billy the Dog inspect the scene of the fire. I looked into her eyes and saw that she was telling me it was arson caused by a fire accelerant.

Judge: (to defense lawyer) Any objection?

Expert: I could tell by the position of Billy’s tail that she wanted me to know the fire was ignited by a petroleum distillate so as to collect insurance on the property.

Judge: (being driven completely out of her mind) Any objection, counsel?

Edwards and Gertner were unsparing of their colleagues. “Non-science is enshrined in judicial opinions,” said Edwards. Courts simply repeat experts’ claims that their field has a zero error rate. No scientific discipline has a zero error rate. “Judges will not get off their duffs until real scientists come in with real studies,” he concluded.

She castigated the judicial “dodge” of saying that the discrediting of these forensic disciplines “goes to weight, not admissibility.”  What if the prosecution proffered expert testimony on dunking? Would it be within the judge’s sound discretion to admit it?

A satirical blog for criminal defense lawyers and their friends who won't give up without a squawk.
View all posts by Appellate Squawk →
This entry was posted in Forensic "science", Judges, Law & Parody and tagged Innocence Project, Judge Harry T. Edwards, Judge Nancy Gertner, NAS Report, PCAST Report. Bookmark the permalink.