The Second Circuit has just held that it was wrong to fire a skydiving instructor for telling a customer he was gay.  Under Title VII of the federal law, a person can’t be “discharged because of a homophobic customer.”  Zarda v. Altitude Express, Inc.,  Skydive Long Island.

Sounds perfectly sensible, although Title VII, unlike New York law, doesn’t expressly designate sexual orientation as a protected category. But the court applied the principle of unio non sequitur ipsi dixie to construe the statute according to evolving standards of penumbras and concluded that sexual orientation is a subset of sex.

The dissents didn’t buy this.  Although they wrote 100 pages proclaiming their fealty to oppressed minorities, complete with learned quotations in ancient Greek, dazzling references to the Frankfurt School and indignant reminders of the days of “Help Wanted: Negroes need not apply,” they nitpickingly concluded that if Congress wants to include sexual orientation in Title VII, they have to say so.

Simple Justice says the skydiving outfit doesn’t have the money to appeal to the Supremes. Still, we could imagine them reversing, perhaps invoking the principle of e pluribus loquitur. (NB: for every canon of statutory construction, there’s always one that says the opposite). Justice Thomas would write a concurrence saying there was no such thing as sexual orientation in 1789, and the three ladies from New York would issue a ringing defense of equality and social justice.

The real problem with the Second Circuit’s decision is that Zarda wasn’t “discharged because of a homophobic customer.” He was fired because a woman customer complained that he’d touched her inappropriately and that he’d tried to excuse this by saying, “Don’t worry, I’m gay.”

In other words, he was fired for allegedly being a jerk, a category not protected under Title VII.

Here’s the story: 19-year old Rosanna, a waitress from Long Island, celebrated her birthday by going on a skydiving adventure with her boyfriend. Recreational skydiving, as we discovered from our Google research, doesn’t require any special skills, such as remembering to pull the parachute cord. Instead, the customer is harnessed under a “tandem master,” illustrated below, who takes care of these details: 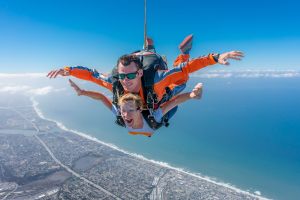 Rosanna had no problem with being harnessed to tandem master Zarda and laughed off the hilarious jokes from the other instructors suggesting that her boyfriend ought to object. But as they sat in the plane waiting to jump, Zarda put his hand on Rosanna’s hip and his chin on her shoulder in a way that made her uncomfortable.  “It was unnecessary,” she said in her deposition. “I mean, he didn’t have to rest his hand on my hip. Once you’re fastened, you’re fastened and you can put your hands on your side.”

Zarda apparently realized that she was annoyed, because as they were drifting down, suspended from the open parachute, he said he hoped he hadn’t made her uncomfortable on the plane, but “Don’t worry, I’m gay.” He then related that he’d just broken up with a man.

Rosanna’s boyfriend, who’d witnessed Zarda’s nuzzling on the plane and learned that she was upset, told Zarda’s boss. The couple didn’t threaten legal action, demand that Zarda be fired or complain that he was gay. Their beef was simply that he’d ruined Rosanna’s birthday skydive with his unprofessional behavior. The boss, who’d previously had complaints from women about Zarda, fired him.

Now, it doesn’t take a #MeToo crank to see that if a man realizes that his touching has made a woman uncomfortable, it only adds insult to injury to say, “Don’t worry, I’m gay.”  The insolent message is, “You have no right to object to my touching, because I’m not sexually attracted to you.”

In fact, Zarda’s complaint filed in federal court makes exactly that argument. While not denying the allegation of gratuitous touching, he finds it  laughably irrational that it could be considered “inappropriate.” Because, he explains, since he’s gay, he couldn’t have done it “to gratify himself sexually.” Therefore, according to him, he was fired because of a complaint by a “homophobic person who objects to being near a gay man.”

The Second Circuit swallowed this whole, assuming without a word of discussion that Zarda was “discharged because of a homophobic customer.”

The lesson, ladies, is that if you find yourself being pawed by a gay man, don’t be a homophobe! Console yourself that he’s not being gratified sexually.

A satirical blog for criminal defense lawyers and their friends who won't give up without a squawk.
View all posts by Appellate Squawk →
This entry was posted in Law and tagged Zarda v. Altitude Express. Bookmark the permalink.