Posted on October 3, 2018 by Appellate Squawk

The latest decree from the boss is to reform our vocabulary in compliance with The Criminal Justice Reform Phrase Guide authored by The Opportunity Agenda, a propaganda machine describing itself as a “social justice communication lab” that “shapes compelling messages and narratives” to combat “well-financed communication efforts that support inequitable and unjust policies.”

The Guide sets out “Five Tips for Language That Changes Hearts and Minds,” #1 being “People, Not Labels.” Thus, we speak not of prisoners, but of “People who are currently incarcerated.”  Ex-Cons should be called “People who have paid their debt to society.” Neighborhoods aren’t to be called “dangerous,” let alone “crime-prone,” but “Communities experiencing high levels of violence.”

Burglars, we could add, should be called, “People who do not have the house keys,” and drug dealers called “People whose merchandise lacks FDA approval.” Really, when it comes to describing “people who have committed offenses,” there’s not much you can teach a defense lawyer about euphemism.

Another example of the Opportunity Agenda’s shaping of compelling messages and narratives is a comic book featuring a heroine who transforms from “Ariel Black” to “Helvetika Bold” (misspelled typefaces, get it?).

The villain is “The Mindset,” a robot with a keyhole for a face, who declares, “Consumers! Behold as I ravage the Truth, play on your fears and defeat your hopes and aspirations using the most powerful weapon ever known. . . THE DOMINANT NARRATIVE!”

Beneath The Mindset are five disembodied heads trapped in ice cubes saying things like, “Lost your home? Well, sorry, buddy, some people just shouldn’t own houses,” and “Look, I love legal immigrants. . .it’s just those Hispanic ones I can’t stand!”

Comes now Ariel Black, a curvaceous black woman, “who dares to speak counter to The Mindset,” and is duly reviled by the powerful organization “Media Corpse.” She stalks over to their headquarters to demand a retraction, passing through a community experiencing a high level of people whose heads are enclosed in ice cubes, and ends up in the old composing room where “the great underground newspapers of the past” are buried.

“Man, they were the real deal,” she exclaims, apparently never having seen an underground paper, with or without trigger warnings, of which this is a typical example:

Suddenly, KRZZAAAK!!!  and four-eyes Ariel metamorphoses into the hefty Helvetika Bold. Her first act is to reshape the consumerist, Truth-ravaging messages of Times Square: 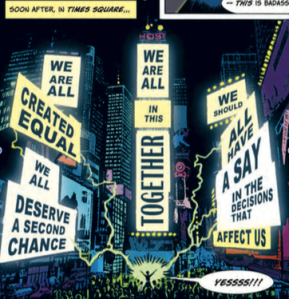 The ice cubes around people’s heads melt, as they say things like, “Makes me wonder why I am being paid less than my male co-workers?” and “Maybe another world is possible?”

“The fight for our common narrative is far from over,” warns Helvetika, brandishing her fists, Maoist-style.

Our hearts and minds are duly stepping into line.

A satirical blog for criminal defense lawyers and their friends who won't give up without a squawk.
View all posts by Appellate Squawk →
This entry was posted in Criminal Defense Appeals, Law & Parody and tagged Opportunity Agenda. Bookmark the permalink.