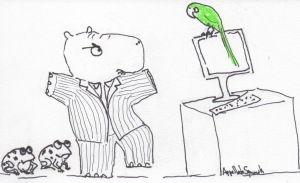 A couple of years ago we published “Are you a cissy?” , a spoof of a compulsory training inflicted on us by the boss’s wife who announced a mandatory policy of quizzing our clients about gender issues. On first contact, no less.

No doubt it’s impolitic to make fun of silly decrees when they emanate from the boss’s wife. So we weren’t too surprised that the boss got mad as a wet hen when she saw our blog on the Company email.

But we were surprised at how wildly misread our blog was by people in our office who call themselves appellate lawyers. Granted, they were new hires, but surely to get the job they had to show some ability to read and comprehend prose.  The howls of uninformed indignation that went up! “Offensive!” “Harassment of a protected class of individuals!”  “Lack of respect and compassion!”  “An ugly slap/laugh in the face!” “Management (or the union?) should step in!” “A huge distraction from doing my job today!”

They were especially adept at the “I’m-only-thinking-of-our-clients” pieties: “Reflects back on my colleagues and I [sic], and our clients.” “Clients may read this thinking this is the view of, or even condoned by, [us], and judges may, as well.”

A couple of the most zealous tyros spent hours huddling with the Proskauer Biglaw enforcer and kept watch over the teapot to keep the tempest brewing. For the last two years.

On Friday, the Star Chamber handed down the judgment:

The Committee finds that the blog post violated the EEO Policy because it was reasonably understood by the complainants to denigrate persons based on characteristics protected under the Policy and the City Human Rights Law, namely, gender identity and expression. As several of the complainants observed, the blog post demonstrated not just a lack of respect and compassion for, but outright hostility toward trans and gender non- conforming clients. By making jokes at their expense, the blog post can reasonably be interpreted to denigrate the concept of gender identity and ridicule the notion that questions should be asked of clients designed to ascertain and respect their gender identities. These messages are reasonably interpreted as derogatory toward persons in a protected class. It should be noted that the City Human Rights Law expressly states that the deliberate mis- gendering of a client (such as by deliberately using an incorrect gender pronoun) is an act of discrimination subject to penalties under the law.

In addition, the blog post denigrated clients by using stereotypes to paint our clients in a disparaging light. Particularly offensive was attributing the use of racially charged language such as “homie” and “call me Killer” to the pretend client.

Although the blog post was evidently an attempt at humor, the EEO Policy explicitly states that inappropriate conduct or language meant as a joke can lead or contribute to harassment.

You are required to attend the next training on Sexual Orientation, Gender Identity and Expression (SOGIE) that we will provide for the staff of the Criminal Appeals Bureau. This date will be provided to you as soon as it is scheduled. Failure to attend could be grounds for further discipline, including termination.

Further, you are warned that the content of any future blog post you elect to share on our email system will be reviewed to ensure that is comports with both our internal policies and the law. Should your blog post violates [sic] our polices again, this will be grounds for further discipline, including termination.

For anyone morbidly interested, here’s the whole thing: Complaints and judgment Appellate Squawk

“Mad-eyed from stating the obvious,” we explain for the last time that what we’re “denigrating” is not the downtrodden, but Wifey’s notion that we should pry into our clients’ sexuality when it has nothing to do with their case.  And yeah, most clients — in fact, most people –not having had the benefit of Sogie training, may well consider it offensive to suggest that they’re “gender non-conforming” unless they’ve chosen to say so.

Now that the boss has avenged her wife’s honor and promoted the toadies to supervisors, we’re inclined to let it drop. As George Bernard Shaw said, “Never wrestle with a pig. You just get yourself dirty and besides, the pig likes it.”

On the other hand. . . what’s so bad about mud wrestling? Maybe we’d like it too.

A satirical blog for criminal defense lawyers and their friends who won't give up without a squawk.
View all posts by Appellate Squawk →
This entry was posted in Law & Parody, Satirical cartoons. Bookmark the permalink.

13 Responses to Squawk is condemned