Putting the brakes on “victims’ rights”

Posted on September 1, 2019 by Appellate Squawk

“The Young Savages,” a 1961 movie about teenage gangs (Italo-Americans vs. Puerto Ricans), filmed on the streets of pre-gentrified New York, opens with three Italo teens killing a Puerto Rican youth who’s not only unarmed but blind. “New York is cold, cold,” says the grieving mother to the Assistant District Attorney (Burt Lancaster). “In Puerto Rico, everybody say hello. In New York, there’s no love.”

Just when your heart is going out to her, she adds, “So I want those boys to fry, Mr. District Attorney! There will be no justice until you send them to the electric chair!”

A man pleads not guilty to sex trafficking and is found hanged in his cell. His accusers, not satisfied that he’s paid with his life, bitterly complain that they’ve been cheated of their day in court. The federal judge obligingly holds a special proceeding for them to vent their fury in the courtroom. “I believe it is the court’s responsibility and manifestly within its purview to ensure that the victims in this case are treated fairly and with dignity,” he announces. (“Manifestly” being a judicial term of art for “having no legal support whatever”).

Does anybody besides Simple Justice see anything haywire when a judge presiding over a case decides that the accusers are victims? Without the silly formality of a trial, much less a verdict?  Turning his courtroom into a soapbox because of a  “manifest” belief that a court has a responsibility to soothe their outrage? To hell with proof beyond a reasonable doubt when you can substitute “believe the victim.”

So it was pretty amazing when, during that same week, another New York court came out with the radical holding that although victims have rights, “those rights are limited and do not allow victims to control the criminal process.”

The occasion was a lawsuit filed by the widow of Police Officer Joseph Piagentini, who was ambushed and shot to death during the 1970’s enthusiasm for killing cops in the name of the Black Revolutionary Army.  Herman Bell, a college student at the time, was convicted of murder and sentenced to 25 years to life. Now that he’s 70 years old and a changed man after serving 40 years in prison, he was finally released to parole.

“Irrationality bordering on impropriety,” fumed Mrs. Piagentini in her petition against the Parole Board. For her and the Patrolman’s Benevolent Association, nothing short of life imprisonment for Bell will ever be enough.  After all, they argue, John Lennon’s assassin got 20 to life and is still being denied parole.

A slew of public defender organizations filed an amicus brief saying that crime victims shouldn’t be allowed to interfere with Parole Board decisions, at least not on the rare occasions when the Board gets it right.  The court agreed. A victim isn’t a party to the action and has no standing to appeal a decision.

They have plenty of influence as it is. 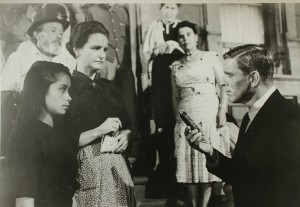 A.D.A. Burt Lancaster consults the wishes of the victims.

A satirical blog for criminal defense lawyers and their friends who won't give up without a squawk.
View all posts by Appellate Squawk →
This entry was posted in Civil Liberties, Criminal law. Bookmark the permalink.

3 Responses to Putting the brakes on “victims’ rights”