Posted on December 6, 2019 by Appellate Squawk

The news video in our office elevator, appropriately called “Captivate Network,”  recently announced that the San Francisco Airport has appointed a pig named LiLou as its official therapy animal. LiLou, who wears a tutu and plays a toy piano, is no doubt a great comfort to people standing in line waiting to be strip-searched by the TSA.

“All flights are canceled at this time.” 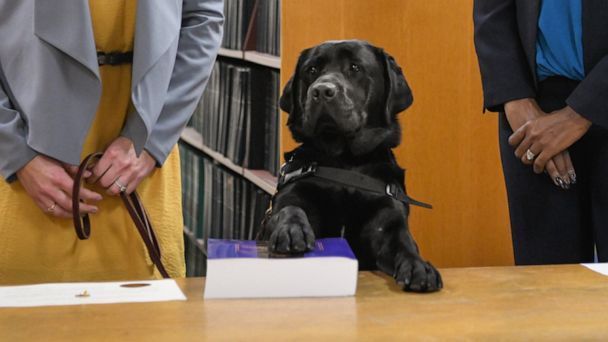 “This is not Brady material!”

And then there are therapy dogs on the witness stand.  To appeal to the jury’s sympathy and bolster the credibility of child complainants, right?

“Many defense attorneys are concerned,” they sniff, “that the presence of a dog could cause sympathy towards the witness or make it seem like the witness is more credible.” But if the judge instructs the jury that the adorable pooch nuzzling the complainant is merely there to create “a more calming supportive setting for this witness,” and that the jury is “not to credit the witness’ testimony in any way simply because of the presence of the dog,” why then, Bob’s your uncle!

Oh, yeah? Well, the same doggy website features a glowing article by a hard-bitten prosecutor about how she was just about to kick an incorrigible teenager off a drug program and throw her in the can when Jeeter the Therapy Dog came to save the day:

Jeeter approached the table where Chelsea was seated, put his two paws up on it and reached his head towards her. Chelsea dissolved into tears and buried her head into Jeeter’s neck. After she composed herself she turned to all of us and said, “See, Jeeter thinks I can get sober.  Please give me another chance.”

We were so moved by the interaction between the two of them that we put our best judgment aside and agreed that she could have one last chance.

Now if that doesn’t bring tears to your eyes, you must be a terrible person. Trouble is, it confirms exactly what’s wrong with putting Jeeter on the witness stand. “See, Jeeter thinks I’m telling the truth. Please convict the defendant!” 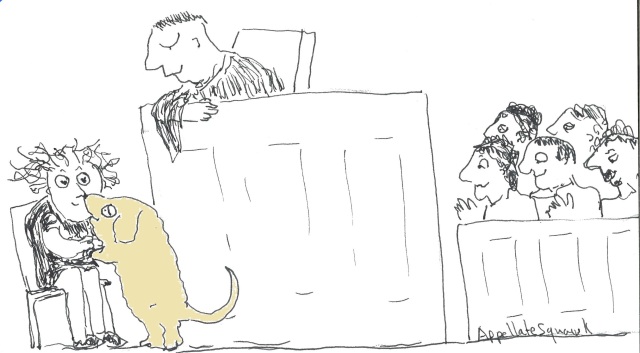 A satirical blog for criminal defense lawyers and their friends who won't give up without a squawk.
View all posts by Appellate Squawk →
This entry was posted in Law & Parody, Satirical cartoons and tagged Therapy dogs. Bookmark the permalink.

6 Responses to Let’s keep dogs off the witness stand.