Posted on December 29, 2019 by Appellate Squawk

You have four felonies and a slew of misdemeanors under your belt. Being a New Yorker, it hasn’t escaped your attention that there are lots of cops in Times Square, not to mention a precinct house under a gigantic neon sign saying NEW YORK POLICE DEPARTMENT.

You reckon this is a good place to stand on the street drinking alcohol from a brown paper bag.

With your pockets full of counterfeit money and cocaine.

You’re astonished that the cops get curious about what you’re drinking. And since you didn’t bring along any proof of address, you can’t get off with a ticket. You’re arrested and searched.

You display your street smarts by telling the cop, “I will give up who I got the currency from, the counterfeit bills from, if you make the drug charges go away.”

There’s a question about whether standing in Times Square with $300 in funny money is proof of intent to use it. The jury thinks it is. But since you weren’t seen passing the bills, you get the minimum sentence.

The Court of Appeals affirms the conviction.

Except for Judge Wilson, who considers this an egregious example of police pursuing “quality of life violations that disproportionately affect the poor (not merely those committing the infractions, but their families, neighbors and communities).”

Then, after an adorable aside about what an indulgent daddy he is to his spendthrift teenage daughter, he lectures the majority on elementary principles of relevance. With humorous examples.

His parting salvo:  “None of that would have happened had [the defendant] been affluent, drinking rosé with a chilled lobster picnic splayed out on Central Park’s Great Lawn on a sunny summer afternoon.”

Showing that he knows even less about Central Park than Times Square.

Gloria Newmoney: That would be very wrong, Winthrop. The only way to test Judge Wilson’s hypothesis is by having comparable facts. So we have to drink it out of a brown paper bag.

Winthrop Rothschild III: Whatever you say, darling. I forgot to bring napkins but we can use these real $100 bills instead.

Park Ranger: We can’t let you off with a ticket unless you have i.d.

Gloria Newmoney: No problem, officer. Thanks to our undeserved privileges in this inequitable society, we carry i.d. and leave our contraband home.

Park Ranger: (examining the rosé) This is a terrible vintage! You’re under arrest. 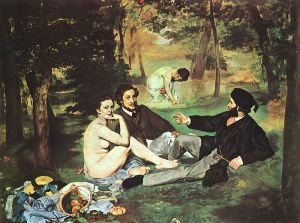 Addendum: Midnight on New Year’s Eve found us in Prospect Park watching the fireworks and drinking champagne – okay, French sparkling wine – out of jam jars. Not a cop in sight. They were all in Times Square policing tourists of color, i.e., with deep  red beer-faces.

A satirical blog for criminal defense lawyers and their friends who won't give up without a squawk.
View all posts by Appellate Squawk →
This entry was posted in Law & Parody and tagged Court of Appeals, Judge Rowan Wilson, People v. Britt. Bookmark the permalink.