“Appearing in court isn’t supposed to be fun.”

Posted on December 22, 2017 by Appellate Squawk 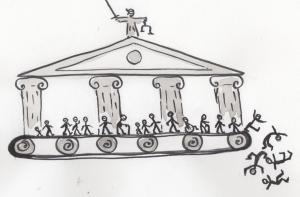 Anyone unlucky enough to have their presence required in a New York City criminal court can sit in the courtroom for hours, shouted at by overbearing court officers in bulletproof armor and unable to get the attention of anyone who might know when or if their case will be called. There are long stretches where nothing seems to be happening and the judge isn’t even there, but you don’t dare ask what’s going on. As likely as not, when your case is finally called, you’re just given a date to come back for more of the same. In sum, NY courts have all the dignity of a pineapple cannery with none of the efficiency.

The cops and court officers would like to keep it that way. When, as part of a project to make the process more user-friendly, the Center for Court Innovation [CCI] created a 144-question survey for defendants, the tough guys howled in indignation.

“Appearing in court isn’t supposed to be fun,” they explained.  “You want these people not to want this to happen again. It’s not supposed to be a positive experience to get locked up or get a summons.”

The enforcers were particularly outraged by questions suggesting that court staff, including judges, should be helpful and courteous. “It’s not my job to be nice,” was the retort.

The NY Post agreed that the survey was nothing but Mayor De Blasio’s “latest crook-coddling push.”

What really put their noses out of joint was the $15 Dunkin Donuts gift card offered as an incentive to participate in the survey. “Many of these people committed crimes,” observed the president of the Court Officers Association. “How much more do we want to coddle them?”

The survey is based on the CCI’s theory, explained in their 3-minute animated video “Procedural Justice,” that the way people are treated can be more important to them than the outcome of their case. If people understand the procedures and their legal rights; perceive the process as neutral and transparent; feel that their side of the story is being heard; and are treated with dignity and respect, they’re more likely to follow the law in the future, even if they lose their case.

(On a geeky note: offering a gift card for participating is a way of making the survey more representative. Otherwise, the only people who’d take the time to answer are the ones with a beef).

Here are some of the questions asked:

Did someone who works for the court say “hello” or “good morning” to you when you entered the courtroom?

Did the judge or court officer tell you about how long you would wait until your case was called?

Did the judge or court staff apologize for any delay before your case was called?

What would have made the waiting experience better?

Did you know why some people’s cases got called before yours?

If you had a question, did you know who in the courtroom to ask?

Did the court officers or clerk give helpful answers to questions?

Did the court officers or clerk seem happy to answer any questions anyone had?

Did the judge introduce himself or herself at the beginning of the court session?

Did the judge explain that you are innocent unless proven guilty?

Did the judge seem concerned about making sure you understood everything that was going on in your case?

Did the judge show bias in favor of the prosecutor?

Did you feel pushed around by people with more power than you?

The survey also asks about confidence in the criminal justice system, such as whether it treats persons with “dignity and respect,” or “the average person cannot understand what takes place in the courts.”

The last section asks about attitudes towards law, such as whether people “should obey the law even if it goes against what they think is right,” or whether “laws prevent me from doing what I want” and believe that “breaking the law is no big deal as long as you do not physically harm someone.”

A 2-page CCI handout proffers unheard-of but stunningly obvious practical suggestions: there should be a “welcoming and respectful atmosphere” at the courthouse entrance instead of the typical cattlecar ambience. The judge’s bench should be at eye level to enable meaningful eye contact. People are entitled to an estimate of wait time. (If the subway system can do this, why can’t the courts?). The judge should apologize for, or at least acknowledge, how long s/he’s kept people waiting. (As opposed to routinely sashaying in at 11:30 to a courtroom full of people who’ve been sternly ordered to be there at 9:30).  Judges should avoid the appearance of coziness with the prosecutors and call the defendants by name instead of “defendants” or “bodies.”

We stopped by the Manhattan criminal court to find out more. As usual, everyone had the NY Post open in front of them. But they didn’t know nothing about no survey.

It’s not wimpy to be courteous to the public. Even if some of them are criminals. Or worse – –  defense lawyers.

An updated version appears in The Crime Report.

A satirical blog for criminal defense lawyers and their friends who won't give up without a squawk.
View all posts by Appellate Squawk →
This entry was posted in Criminal procedure and tagged Center for Court Innovation, New York courts, Procedural justice. Bookmark the permalink.

3 Responses to “Appearing in court isn’t supposed to be fun.”