The ban on “sex offender” art

— President of the University of Southern Maine explaining his order to remove three paintings from an art exhibit upon learning that the artist was a registered sex offender.

The exhibit was a curated group show entitled “Industrial Maine: Our Other Landscape.” The artist whose three paintings presented “a very real” potential to trigger traumatic memories of abuse was a well-regarded Maine painter whose “industrial landscape” work looks like this: 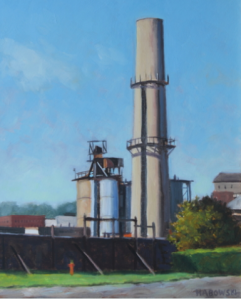 Title: Distant Industry. “I painted this piece plein air at a local closed paper mill. . . The smokestacks, the icons of the Industry survive to remind us of our past.” 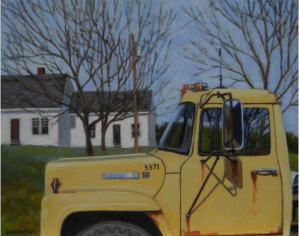 Title: Cape with Yellow Truck. “Many times in my travels in the back roads of Maine I have come across these old trucks just rusting in the fields. . . put to pasture, so to speak. 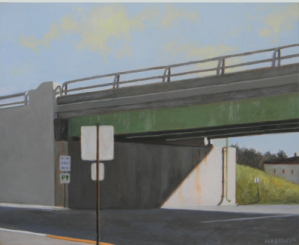 Title: Signs and Overpass. “The painting was all about simple design and the feeling of loneliness.”

He’s on Maine’s SORA registry based on a conviction from 20 years ago for which he served six months in jail. When the show went up, a relative of the victim complained to the Prexy.  Before you could say “public safety,” his three paintings were gone.

The outraged curator refused to replace them.  Instead, she put placards in the empty spaces saying:

Apparently the placards also constituted a clear and present danger of invading the safe space of victimized students.  The Prexy had them removed.

Mind you, this wasn’t the act of some freshman snowflake melting over being assigned to read “Hamlet.”  This was the middle-aged president of a state university proclaiming in all seriousness that looking at a painting of Maine landscape has the “very real” potential to trigger a traumatic episode.

The greatest absurdity, of course, is his notion that college students take their noses out of their Smartphones long enough to notice anything at all, unless it’s something to eat.

Jason: I don’t know.  There might be a painting of a smokestack by a sex offender.

Jason: On the other hand, there’s free wine and cheese.

Tiffany: What are we waiting for? Let’s get there before it’s all gone!

The artist was generous about it, saying he was sorry his paintings had drawn “negative attention” to the exhibit.

At least he’s in good company. The National Gallery of Art in D.C. just canceled a show of Chuck Close because of allegations of verbal sexual harassment by a portrait model. What if Leonardo had said something fresh to Mona Lisa? Would the Louvre send “La Gioconda” back to Italy in disgrace?

The only solution is a Salon des Refusés for artists rejected from mainstream venues based on their sexual misbehavior. Starting with Gauguin, Picasso, Close and our painter of Maine landscapes. There would be lines around the block.

Postscript: In September, the Anti-Registry Movement will hold an outdoor art show of works by SORA registrants in front of the USM campus. For more information, go to Oncefallen.com.

A satirical blog for criminal defense lawyers and their friends who won't give up without a squawk.
View all posts by Appellate Squawk →
This entry was posted in Civil Liberties, Satire and parody, SORA. Bookmark the permalink.

15 Responses to The ban on “sex offender” art