Stop the presses! A reversal based on a suggestive lineup!

Posted on September 4, 2011 by Appellate Squawk

The First Department made history last week by reversing a conviction because the lineup was suggestive (“Appellate Panel Orders Robbery Retrial Over ‘Suggestive Lineup'”NYLJ 8/31/2011 ).

The last time a court thought a lineup was suggestive was back in the Nixon administration. Even then, they found it harmless: “To be sure, the witness had described the perpetrator as wearing a paper bag over his head and a t-shirt reading KISS ME I’M ITALIAN, and defendant was the only person in the lineup wearing such a shirt,” the court conceded. “Nevertheless, it cannot be said that this created a risk of an irreparable misidentification, where the witness plainly had a clear, unobstructed view of the perpetrator’s eyes through the paper bag.” People v. Vito Corleone.

In last week’s decision, the witnesses had described the robber as a “huge, big fat black guy.” This apparently led the police to suspect Mr. Kenley, who weighed 400 pounds. They put him into a lineup with fillers who weighed 210, 225, 260, and 285 pounds.

Manhattan Judge Bartley decided that was close enough for jazz. “There is no requirement that the defendant in a lineup be surrounded by individuals nearly identical in appearance,” he opined, punching his computer macro key. After all, he reasoned, Mr. Kenley “was not the only large, overweight man in the lineup.” (And these people want raises?)

A law student from New York’s leading safety school dared to disagree. “As the eye pans across the photos of the lineup, it lands squarely upon the massive body of Mr. Kenley,” he argued. Right on, kiddo!

The First Department admitted as how there was a “marked difference” between Mr. Kenley and the fillers. “We do not mean to suggest that the police are obligated to find grossly overweight fillers,” they added, as if fat people had no feelings.

As the eye pans across what courts say and what they actually do, we can’t help noticing a marked difference between preaching and practice.

Courts have been hollering for decades about the unreliability of eyewitness identification: 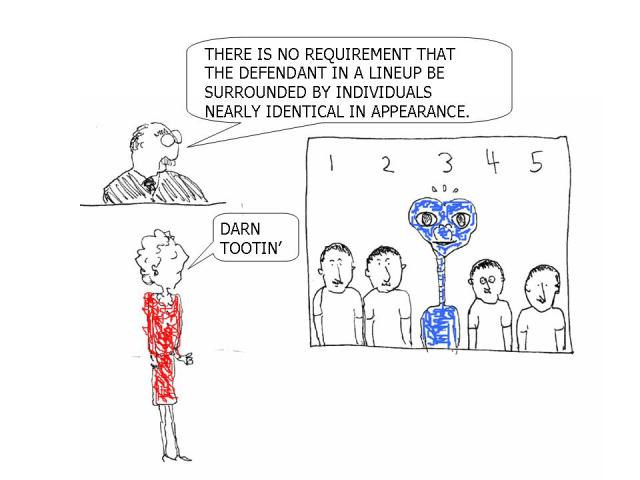 A satirical blog for criminal defense lawyers and their friends who won't give up without a squawk.
View all posts by Appellate Squawk →
This entry was posted in Criminal law, Law, Law & Parody and tagged eyewitness identification, People v. Kenley, wrongful convictions. Bookmark the permalink.